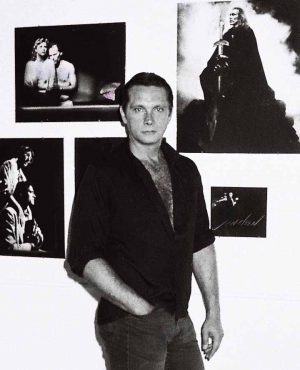 The year of my birth –1946, leading figures of culture paid homage to Antonin

Artaud at the Theatre Sarah-Bernhardt in Paris. Artaud, who had been a film actor, a director and a playwright was just released from nine years of tragic confinement in an asylum for the insane. Two years later he died, leaving behind him a body of important criticism, demonstrating his legacy of uncompromising search for magic and truth in a monumental effort to bring life into the theatre. Some credit Artaud with being a founder of post modern theatre – for me, his insights are a guide to what a theatrical vision of photography aspires.  The phrase “Theatre of Cruelty” was coined in March 1932.  “To spoken language I am adding another language and trying to restore its old magical efficacity, its power of enchantment . . .”said Artaud.  For him cruelty means diligence and implacable resolution. Transfiguration is Cruelty.

Nietzsche said that nobody can get more out of things than he already knows. For what one lacks access to from experience one will have “no ear.” I spent a good deal of my life learning about my subjects and involved in the processes of photography of my era, finding particular joy printing black and white in the darkroom.. I formally studied classical ballet and method acting after leaving university studies in art history and philosophy. I apprenticed with several successful commercial photographers–Mickey McGuire in automotive advertising, Max Eckert in architectural photography, Marv Lyons and George Meinzinger in commercial studio work in Los Angeles. Instead, I chose a kind of quasi- journalist’s path toward capturing images that best resonated and evoked  “the Performative Moment”  from stages and set atmospheres with working dancers, directors and actors: subjects I most admired. I  followed a desire  for mastery of craft and personal vision over financial reward, perhaps the influence of sublimating a need to perform.  I hope that from within my personal sense of meanings and contexts, a more refined set of values can be conveyed and enjoyed by more viewers.  My effort to present and preserve memory of the work of brilliant if not popularly recognized figures is deliberate.  I believe Artaud would have blessed this peculiar passion/madness– and seen my photographic quest in light of a “certain poetry in space which itself is taken for sorcery.”

Artaud from The Theatre and Its Double

“It would be meaningless to say that the New Theatre includes music, dance, pantomime, or mimicry.  Obviously it uses movement, harmonies, rhythms, but only to the point that they can concur in a sort of central expression without advantage for any one particular art.  This does not at all mean that it does not use ordinary actions, ordinary passions, but like a springboard uses them in the same way that humor as destruction can serve to reconcile the corrosive nature of laughter to the habits of reason.

But by an altogether oriental means of expression, this objective and concrete language of the theater can fascinate and ensnare the organs. It flows into the sensibility.  Abandoning Occidental usages of speech, it turns words into incantations.  It extends the voice. It utilizes the vibrations and qualities of the voice.  It wildly tramples rythms underfoot, It pile-drives sounds. It seeks to exalt, to benumb, to charm, to arrest the sensibility.  It liberates a new lyricism of gesture which, by its precipitation or its amplitude in the air, ends by surpassing the lyricism of words.  It ultimately breaks away from the intellectual subjugation of the language, by converying the sense of a new and deeper intellectuality which hides itself beneathe the gestures and signs, raised to the dignity of particular exorcisms.

For all this magnetism, all this poetry, and all these direct means of spellbinding would be nothing if they were not used to put the spirit physically on the track of something else, if the true theatre could not give us the sense of a creation of which we possess only one face, but which is completed on other levels.”

This site is currently dedicated to editing and defining a collection of Jan Deen images toward book form, many previously published in print, celebrating unique and powerful live performances created by artists working in the environment of 20th century fin de mille Hollywood.  The era (1971-2001) being considered consists of what was known as The Dance Explosion to devastation in the dance world by AIDS,  Equity Waiver Theatre’s proliferation and collapse, and the revolution against convention called Performance Art.  All images are sourced from film.

I heard noises, I saw things I had seen before. I became conscious.

I have acted as though I were alone in the world.

I have not been well-behaved.  I have been obstinate.

I have been alone too little.

An attitude of rejection toward complexity prevalent in our materialist approach to culture by those who wish to make simple choices, embrace a cynical pessimism and escape the weight of personal salvation in resignation to illusion, a politics of denial or religion of escape to cliche modes of thought and behavior will find at best a curious collection of images here that begs the question of why I have chosen  often ignored and obscure metaphors, those found most often in ephemeral Live Performances, as my focus.   I am not suggesting that a theatre without common language is my objective ideal.  On the contrary, I hope to demonstrate that there is a living language surrounding us that needs attention and expansion of purpose, that an audience which appears to be literally devolving through lack of stimulation and meaningful dialogue can change the fate of a species falling deeper into collective psychosis, and that individual genius and clarity of intentionality is the greatest revaluation over what seems now to matter most: as one producer so succinctly stated “asses in the seats.”

On a lighter note, I include in my image collection a taste for things Gothic Fantastika published on assignment in Femme Fatales/Cinefantastique.  My ” Retrofuturist Pinups” for Fred Clarke’s first and original standard bearer Behind-the -scenes Fanzines elicit a fresh take on wellworn genre styles by updating cliche projections of working actresses performing at the end of this era.  I was inspired by a study published on 19th Century painter’s imagery,  Bram Dijkstra’s brilliant Idols of Perversity documenting and analyzing the iconography of female archetypes– I chose our fin de siecle pop culture movie queens for my ” Live From Hollywood” update. The challenge was to reflect but refine an often low budget historic cinematic context , yet not fall into the trap of a pretentious Men’s Magazine limited visual valuations.   There is apt comparison between how we view feminine talent today reflecting our current psychology and those more distant frightened fantasies from a previous century of popular art history.  Let us celebrate the empowerment of the feminine.Hopefully those who work in the scifi, fantasy and horror and sub-genres, as well as its many enthusiasts , will find this relevant and amusing.

In a more conceptual context, I am currently working on language that includes an idea I call Intertextual imaging,  a view using the collection for extablishing a method based on an approach currently lacking for placing theatrical images in a scheme of values by a personal esthetics that will permit more detailed and precise discussion .

I leave you with this best of guiding principles from  Nietesche,

You higher men, the worst about you is that all of you have not learned to dance as one must dance–dancing away over yourselves!

What does it matter that you are failures?  How much is still possible!  So learn to laugh away over yourselves!  Lift up your hearts, you good dancers, high, higher!  And do not forget good laughter.  This crown of him who laughs, this rose-wreath crown:  to you, my brothers.  I throw this crown.

Laughter I have pronounced holy: you higher men, learn to laugh.